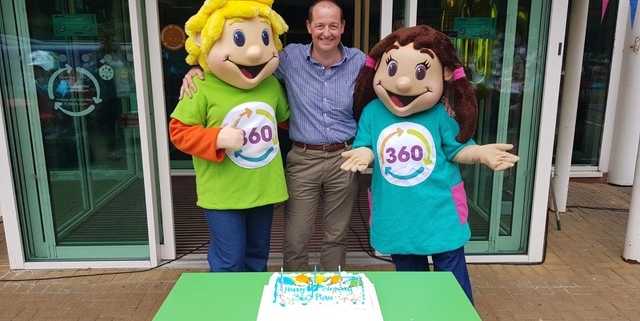 DP Leisure, headquartered at Sunrise Parkway, Linford Wood, marked its 10th anniversary recently with a day of celebrations for all staff in its home city of Milton Keynes.

The operator of the award-winning family entertainment centre brand 360 Play marked the milestone by bringing staff from its six centres around the UK to Milton Keynes, where the first 360 Play centre opened 10 years ago. All the company’s sites were closed for the day as the entire staff of over 400 “made time for play,” starting with a reception and party on 12th Street, Milton Keynes’ newest leisure district. After a morning involving indoor golf at the all new Mulligan’s, a street party was hosted by the original site, 360 Play Milton Keynes at Knowlhill, with street food, stalls, games and activities.

Founder and Managing Director Duncan Phillips commented: “I don’t really know where the time has gone but here we are 10 years on from an idea that started from a day out with my own children. It has been very special to celebrate this milestone in Milton Keynes where we are based and where it all began. We have a great team of staff in the group that deliver hundreds of thousands of magic memories to families in the regions we serve throughout the year and we are all very proud of the company we have now become.”

Someone who has been with Duncan since day one is group business support and development manager Anne Basketfield who added: “Now with 6 (soon to be 7) centres the business and concept continue to grow and we have stuck to our early principle of ‘back to basics’ – encouraging families to play together away from screens and technology, developing imaginations and building independence.”

In contrast to Anne’s experience, recent 360 Play recruit Holly Mortiz, who has been with the company for just a few months, commented: “The close day was lots of fun and brought everyone from 360 Play together. I got to meet lots of people from the other centres who do exactly the same thing as me. Working at 360 Play has changed my life for the better. It has helped me make amazing friends and I have gained more confidence.”

In true leisure industry style 360 Play’s special celebratory day in Milton Keynes was just the start of a year of celebrations, with key dates coming up to further mark 10 years of success for this ever expanding leisure group.